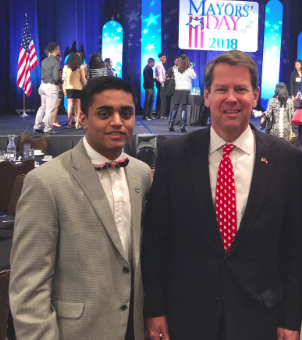 “I know that he is very involved in the community and was a great candidate for the award,”  Mr. Nicodemo said.

The Jefferson Awards for Public Service is a national program that recognizes and encourages volunteerism. The program was founded in 1972 by former First Lady Jaqueline Kennedy Onassis, U.S. Senator Robert Taft, Jr., and Sam Beard to promote community service. They created a Nobel prize for public service.

I enjoy helping people because I would like to make a change in the community.”

WGXA selects one winner to send to Washington D.C. for the award ceremony. Bhavin is the youngest nominee this year.