The Stratford Gazebo launched its premiere newscast on Thursday, Jan. 25.

The weekly broadcasts consist of school news, features, sports … and even the weather. It will include reporting by Gazebo staff members and videos of school events and popular Gazebo features such as Loop Road Karaoke and The Daily Gaze.

“I’m excited everyone will get to see our content in a new way,” said senior Nick Dorogy, a fourth-year journalism student and editor of The Gazebo.

The broadcasts are being produced in new studio in the Olson Library, which was made possible by a donation by a Stratford family. The studio is located in the north sun room and includes new equipment, said Mrs. Elaine Murray, Director of Library and Information Service.

Sports Anchors Leah Davis and Jake Jamison“(The new studio) was a gift designated for the library to make improvements or do something for a special project,’’ Mrs. Murray said.  “We started off with a camera and tripod, two lights, a green screen, we have a Mac computer with video editing software, and the library has donated an iPad to the room for a teleprompter.”

“The new technology in the broadcast room will open doors for us, and I’m excited to use it and see where it will take us in the future,” said Cal Whitworth, a senior and Gazebo videographer.

Journalism teacher and Gazebo advisor Mr. Ed Grisamore said this is an exciting project for the 34 students in Stratford’s journalism program.

“Every student will be involved on some level – reporting, anchoring, production and editing,’’ Mr. Grisamore said.

Sophomore Elizabeth Sellers and junior Cap Patel were selected to co-anchor the first broadcast. Jake Jamison and Leah Davis are the sports anchors, and Andrew Palmer offers his creative take on the weather.

Mr. Grisamore said he hopes a broadcast journalism class can be offered as part of the school curriculum in the fall. Students will still be part of The Gazebo staff, but will concentrate on video production and school documentaries. He also hopes that the weekly newscast can expand in the future, as the students gain experience.

Mrs. Murray said the studio is available to all classes at The Academy. 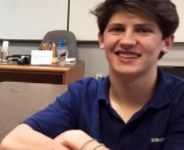 I’m excited everyone will get to see our content in a new way.”

“I’d like to open(the room) up to other teachers in the middle and high school, or school wide,’’ Mrs. Murray said. “But it has been nice that the journalism students have been working in the room for a couple of months and have helped me work out some issues with other things that I needed to buy.”

With technical assistance from the journalism students, Ms. Anastasia Fink plans to video infomercials as part of a project for her fourth-period Fashion Design class in February.

“I’m really excited because now we have a dedicated space just for video, and if there is a visitor on campus and someone needs to video that visitor, they can use the room,’’ Mrs. Murray said. “In the future, it could lead to having video production classes, so we’re hoping that it will grow into a space that can be used for a classroom.”