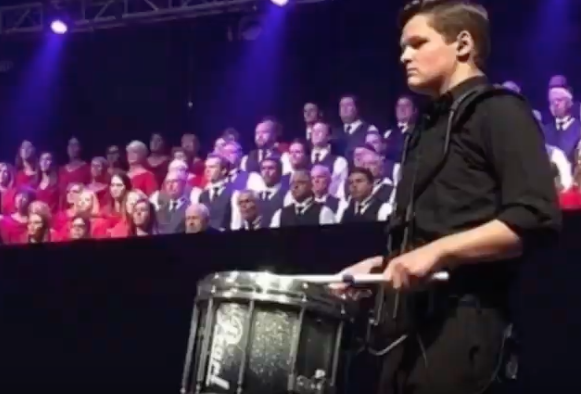 Senior Stephen Grubb is excited about attending  Georgia College next fall. Although he will miss the easy routine that comes along with Stratford, he is eager to start his new journey.

Stephen has been attending Stratford since first grade and has developed a love for the fine arts Stratford offers.

He has played the drums in the Stratford marching band during his four high school years. With his love of music, Stephen hopes his dream of running a record label will become a reality.

Stephen also is  famously known for being a part of the Macon Bathroom reviews and was recently interviewed by  Ch. 13 WMAZ-TV.  He and several of his friends were inspired to begin this review “vlog” when they saw Macon Restaurant reviews and liked the idea.  They began their first review at the Mandarin Restaurant.

His favorite class at Stratford has been Science Fiction because of the open discussions and the movies they watch during class. Stephen is already a victim of “senioritis” and gives strong advice to upcoming seniors to not “take hard classes, because you won’t want to do anything in them.”

He is sad to leave his teachers, especially Dr. Tom Lolis and Dr. Frank Katz, but is excited for a new beginning out of high school.