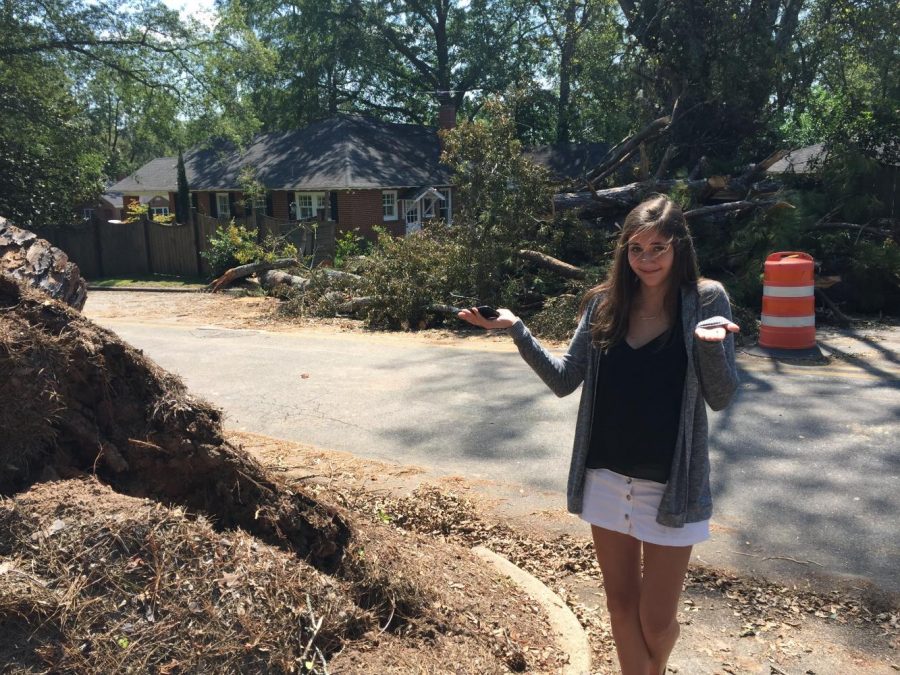 Junior Maggie McCullough stands next the stump of a large pine tree that fell in her front yard on Overlook Avenue, crushing a neighbor’s fence.

Hurricane Irma forces classes to be cancelled for three days, while many students, faculty were still without power

When Emily Sheridan was one of eight senior girls named to Stratford’s homecoming court on Thursday, it was a bright spot in her week.

Of course, she and her Stratford Academy classmates had already spent a lot of their week in the dark.

“We had seven trees fall and lost power on the first day,’’ Emily said. “We still do not have power and we were told that we would get power back on Sunday or Monday.’’

Heavy rain and high winds impacted Stratford students as Hurricane Irma hit Florida and made its way up through Georgia, causing major storm damage and widespread power outages on Monday.

Classes were cancelled on Monday, Tuesday, and Wednesday. When school re-opened on Thursday, many students and faculty members still had not had power restored to their homes.

The weather was the main topic of conversation when classes resumed.

Freshman Harmony Nagle said nine trees fell on her family’s 14 acres of land, but only two were close to her house. She said she and her father were in the living room talking about how well the trees were holding up in the high winds when a large tree fell near the house.

Later, another tree fell close to the house, causing damage to the water pipes. The Nagles had to fill up buckets of water from the pool to flush toilets.

“That was a very low point in my life,’’ she said.

Junior Gracie Bell, who lives downtown near Tattnall Square Park, was still in the dark when she returned to school on Thursday.

“A tree fell on our brick wall and took out a power line,’’ she said. “I have not had power for 72 hours now and will not for a few more days. It’s horrible.”

Sophomore Holly Hunt was among the many students frightened by the severity of the tropical storm, where wind gusts reached more than 60 mph.

“While I was on the second floor of my house, I was looking out the window,” she said. “I saw a tree swaying really hard towards my house. I honestly thought I was gonna die.”

Junior Josie Coleman and her family were among those who chose to stay at a local hotel after the power went out.

“We found out that we won’t have power until Sunday or Monday night,’’ she said. “We decided it would be a good idea to get a hotel room and are staying in a hotel on Bass (Road) now.”

Drew Kelly, a sophomore, said his family was without power for 11 hours on Monday.  He said five trees fell in the woods  near his home.

“I spent my Tuesday picking up sticks,” Drew said.

Jocelyn Tang, a freshman, decided to go to piano practice during the storm. The storm had not reached its peak yet, so she thought it would be OK. On the way home, the storm had gotten stronger.

“There was wind and the trees were shaking really bad,” she said.

She said there were police cars everywhere, a power line had fallen and a lake had flooded. The power was out when she got home.

Upper School Science teacher Mr. Phil Nicodemo moved into a new house a few weeks ago. He said he was worried when the storm hit and the power went out because of some of the animals he keeps.

“I had to use flashlights and candles to see my way around, but my biggest concern was my pet snakes because they didn’t have their heat lamps,” he said.

In addition to caring for his snakes, he was also rushing around his house trying to find ice in the freezer to try and keep from losing some of his specimens. On Wednesday, his birthday, the power finally came on later in the day.

“It was a nice birthday where I could just relax at home, and actually, I graded some Biology tests,” he said.

Another teacher, technology instructor Mr. Mike McCue, lost power on Monday and was still without it at the end of the week.

“It was nice living in the 19th century for the first day or two, but I’m more of 21st century guy,” he said.

Freshman Nora Jorgenson’s family did not have power for three days. But they were still able to have their meals at home.

“The only thing that worked was our gas stove, so we had to cook all of our meals on that,” she said.

Madelyn Stephens, a senior, lost power for two days and found traffic difficult after the storm. Many local traffic lights were out. Her family’s yard was a mess.

“A lot of trees fell in my neighborhood and one was uprooted,” she said.

Freshman Madelyn Poss was at her father’s house during the storm. She said 14 trees fell down on one home.  Another freshman, Will Fackler, also was without power. He spent Tuesday looking for his dog, which ran away when the Invisible Fence did not work because of the power outage.

Junior Alyssa Ferland said even though her power was off for 72 hours and her back yard was flooded, she was grateful because it could have been worse.

“I am lucky because there are others without power and had more damages,” she said.