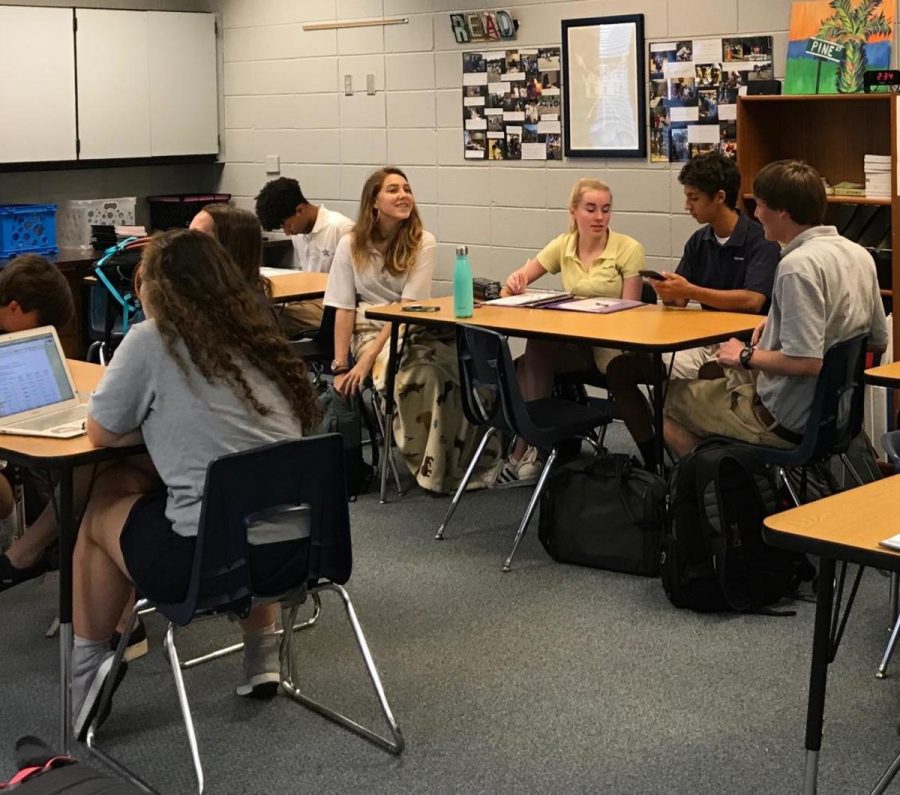 Among the changes at Stratford this year is the new schedule.

“We needed to be able to share resources between middle and upper school,’’ Mrs. Ferrari said. “For example, we have certain middle school teachers who teach in the upper school and vice versa. This situation also applies to students. So having the same schedule helps teachers and students coordinate. Having the same schedule makes it so much easier and simpler when everyone has the same letter day or period.”

I got so used to the old schedule that is was hard to adjust to the new one.”

Another important reason why the schedule changed is Mrs. Ferrari and Upper School Principal Mrs. Margaret Brogdon are now in charge of both middle and upper school.

Faculty members and students have said many comments about the new schedule.

Even though the new schedule has made things smoother for students and teachers, there are some downsides.

“I feel as if 20 minutes is a little short for break and this has caused a slight problem for the Peer Mentoring group because it is not enough time to get everything done,’’ Mrs. Ferrari said. “Also, the loss of the double period is a loss for certain classes or teachers, especially those in the science building because of tests and labs. But, I do feel the benefits outweigh the drawbacks”.

Some seniors feel as they lost certain privileges due to the new schedule. Others, such as

Sahan Vangala, found it difficult to adjust to the new schedule.

“I got so used to the old schedule that is was hard to adjust to the new one,’’ he said.

Other students believe morning traffic is chaotic due to both Middle and Upper school arriving at the same time.

“Since Middle School and Upper School begins at the same time, the morning traffic is so congested because everyone is trying to be on time. Being a student driver, it is hard for me to get to the pit and to homeroom before 8:25 a.m.,’’Katherine Hamilton, a junior, said.

Faculty members in the science building now have a hard time doing labs and taking tests due to the new schedule.

“It is harder to do labs with such a short time,’’ science teacher Ms. Jackie Waters said. “I feel as if students do not have enough time to go through the lab. Instead, they are rushing through the labs and are focused on finishing rather than attaining the information.”

Mrs. Brogden also expressed that the schedule was changed mainly to share resources and teachers between the middle school and upper school.

“We needed to put the middle and upper school on the same schedule in order to share faculty members,’’ Mrs. Brogdon said.

Mrs. Brogden said the old schedule made it difficult and confusing for parents who had children in both Middle and Upper school to organize out of school events such as doctor’s appointments during the day.

Although she misses long classes, Mrs. Brogdon and many other faculty members appreciate the regularity of seeing every class every day.

Mrs. Brogdon said there will be discussion at the end of the year about returning to the old schedule.

“Maybe, we will examine it this year and then work on it with the new middle school principal next year.’’ she said.