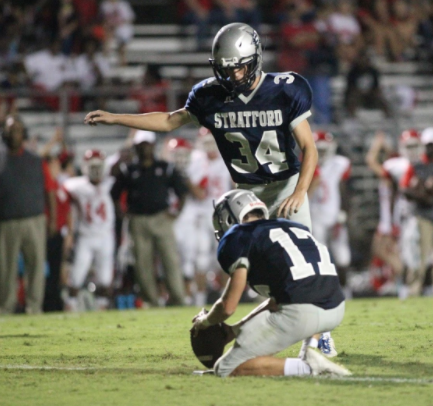 Ace is the place

How my Stratford kicking career started at a local hardware store

Instead, he found a kicker.  That kicker was me.

I have played soccer since I was about 3 years old. I played at Upward for a few years and also participated in Stratford Intramural Soccer League (SISL) for one year. I started playing soccer for Stratford in sixth grade, and I have been playing  ever since.

Soccer  always has been my favorite sport. I played other sports such as track, basketball, baseball, and cross country.

However, football was the one sport I wasn’t interested in playing. 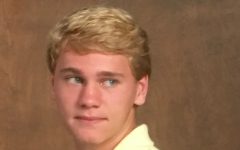 Soccer always has been my favorite sport. I played other sports such as track, basketball, baseball, and cross country. However, football was the one sport I wasn’t interested in playing.”

I ended up playing football in the fifth grade after my parents begged me to try it. After that unique experience, I told myself I would never play that sport again. All of this changed during the summer of my sophomore year when I began kicking for the varsity football team.

I walked into Ace Hardware with my dad and older brother, Ames, not expecting to see any familiar faces. About 10 minutes later, I notice my dad having a conversation with Coach Farriba.

A few days before we went to Ace, my dad asked me if I would kick for the football team. Obviously, I thought he was crazy for asking such a stupid question since my dad knew the answer was no. Well, when I saw my dad and Coach Farriba, I knew I had to intervene because I was certain my dad had already asked him about the possibility of me kicking for the football team.

Sure enough, I was right. About three weeks later, I was out on the Stratford football field kicking extra points and kickoffs with Coach Cater Pierce and Coach David Bailey. A week later, I was on a bus headed to Athens Y Camp with the football team.

Being a kicker is definitely different than all the other positions in football. For one thing, I won’t see any action on the field unless the offense is moving the ball or scoring.

Most people think that being a kicker is easy, but I can assure you, it is not. Every time I walk out for an extra point, it is all eyes on me.

However, I’m not the only one who needs to execute. There is also a snapper and a holder who  must complete their jobs before I can do mine. If everything goes smoothly, I will end up making the extra point or the field goal. Sometimes I do not split the uprights which, mentally, puts me in a hole. Missing a field goal is one of the worst feelings in the world.

Considering my circumstances, if Coach Farriba allows me to attempt a field goal, then he knows I should be able to make it — no questions asked. Of course this is a lot of pressure, but I try not to think about missing a field goal. I usually never take note of how far the field goal is because it messes with my head.

If I am too relaxed for a short field goal then there is more of a chance I will miss. I tend to take all of my field goals seriously because of the few opportunities I get.

Kicking for the football team has brought many amazing experiences into my life.

I am thankful for that day at Ace Hardware.