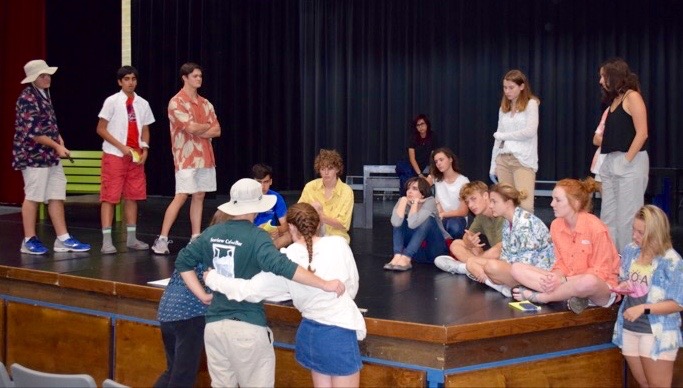 One Act goes Russian in ‘The Good Doctor’

This year’s One Act performance is “The Good Doctor’’ by Neil Simon, based on the stories of Anton Chekhov.

“It’s a really strong acting piece,”  Stratford Theatre Director Mrs. Sylvia Haynie said. “This show has a lot of small scenes [which give them] a chance to show what they can really do.”

“The Good Doctor’’ is a group of short stories that take place in Russia. The performances will be on Wednesday and Thursday at 7 p.m. in the Henry Tift Fine Arts Auditorium.

“It’s about a writer who is expressing himself through his imagination. We sort of see his imagination come to life in different characters in each story,” Mrs. Haynie said.

The play was adapted into a sweet comedy with many funny and inspiring scenes. The students have worked on their Russian accents since day one of practice.

“It also actually helped us recruit some folks who were not usually actors because the kids knew about kids that play around with a Russian accent just for fun,” Mrs. Haynie said. “We ended up with 21 in the cast, and I think at least five or six have never been in a play at Stratford before.”

“There are levels to the humor,” Junior Noah Fenimore said. While the humor is sophisticated for high schoolers to do, he  said they pull it off well.

“We’ve all put a lot of time into the rehearsals,” Noah said. The cast has rehearsed for two months to get ready for competition.

“If you can’t make one of the nights, you should still try and go to the other one because it’s only an hour,” Noah said.

Adapted from the works of Anton Chekhov

The Mistress of the House —  Guinevere Heath

Lady of the Evening — Abby Ellison