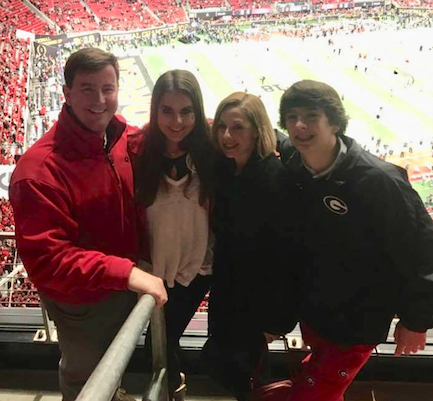 Knox Cleveland, right, with his parents, Blair and Betsy, and sister Ellie, a senior at Stratford

It was an amazing ride

Despite losing in overtime in the national championship game, it was fun to chase the Dogs from Notre Dame to Jacksonville to the Rose Bowl

From the beginning, I knew this was going to be a special season for the Georgia Bulldogs.

Since September, I’ve spent my weekends cheering on the Dawgs. From Indiana to California and back home to the state of Georgia we watched the Dawgs play everywhere.

On Monday, the season ended in a way that we didn’t want to happen. Even though it ended on a bad note, this season was truly amazing.

I was feeling so many different emotions the whole day and week before the game. Happiness, nervousness, and just being straight-up scared”

My family’s first “business”  trip this season was 759 miles from Macon to watch the Bulldogs play Notre Dame for the first time in South Bend, Ind. We stayed in Chicago, and made the drive over to South Bend the morning of the game to tailgate with friends. The game was great, as we won in a thriller that set the tone for the rest of the season. It always be remembered as the first game started by freshman quarterback Jake Fromm.

My family went to Jacksonville to watch the Dawgs battle the Florida Gators in their annual rivalry.  The game was a blowout as the Gators were no test for the Dawgs. This is when I think we all started to realize that this was our season.

A couple weeks later, we made the drive over to Auburn.  Before we went into Jordan-Hare Stadium that day everyone was feeling great. We had all just been having fun with no worries … until the game.

The result was not what we expected. We had been blowing everyone out and had just been ranked No. 1 by the College Football Playoff Committee. We got dominated. We were now just hoping to win out and maybe just maybe win the Southeastern Conference.

After the last Auburn game, everyone was nervous as we made the short drive to Atlanta for the SEC Championship game. The pre-game festivities were not all that fun like the usual games in Athens. This time we were just all nervous, except for the players. We got our revenge and made it looked easy. We flipped the script on our rivals from Auburn and now it was certain we would have a chance at playing for a national championship.

As soon as we found out we were playing in the Rose Bowl — “The Grandaddy of them All” — everyone was excited and starting getting tickets and reserving flights and hotels almost instantly.

The game was in Pasadena Calif., 2,249 miles away.  Our opponent, the Oklahoma Sooners, were led by Heisman winning quarterback Baker Mayfield. I think it’s safe to say we had the time of our lives tailgating before the game and celebrating the massive comeback the Dawgs presented on the oldest college football stage. What a trip!

Through all the ups and downs of the season and everything we had done to make it to the National Championship Game in Atlanta, we reached the goal. Now all we had to do is win one more game.

I was feeling so many different emotions the whole day and week before the game. Happiness, nervousness, and just being straight-up scared. It was the day I had been waiting on my whole entire life and I was praying we could “finish the drill.”

It all came down to overtime against Alabama Crimson Tide. Heartbreak. We lost in an absolute classic. We came up just short of the dream.

Even though it ended in heartbreak, I think we can all agree that it was an amazing ride. The dynasty is just beginning. Go Dawgs!