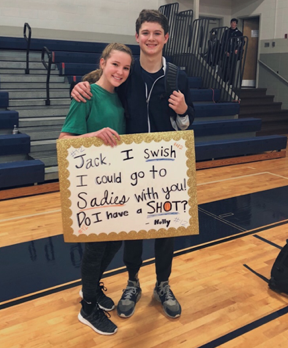 Sophomore Holly Hunt asked Freshman Jack Miscall after their basketball games at Mount De Sales Academy with a sign that said “Jack, I SWISH I could go to sadies with you? Do I have a shot? – Holly, #12”

Girls get to ask guys to Sadie Hawkins dance

Senior, Junior, Sophomore and Freshman Date Walls are listed below

Unlike most other dances, Sadie Hawkins is a dance in which the girls asks the guys.

The Sadie Hawkins dance will take place on Saturday, Feb. 3 at the Emerson Ballroom downtown. The dance will be from 8:30 to 11:30 p.m. (As always, there will be a zero tolerance policy for substance abuse. Students are encouraged to come with a date, friends, or by themselves.)

Every year, many girls find it difficult to ask a guy in a creative and fun way. In the past two years, there has been a homecoming dance and a turkey ball, but this year there was no fall dance. Because this is the freshmen’s first dance, many of these students are nervous for finding a date.

“I was very nervous to ask my date because this is our first dance, and I was even worried he might say no,” said freshman Mary Kate Groves.

This year, there were many creative Sadie Hawkins proposals. Some students used fun signs, while others got creative with food.

Claudia Pope and Will Baxley

Emma Jane Canady and Will Fackler

Allie Wilson and Will Deal