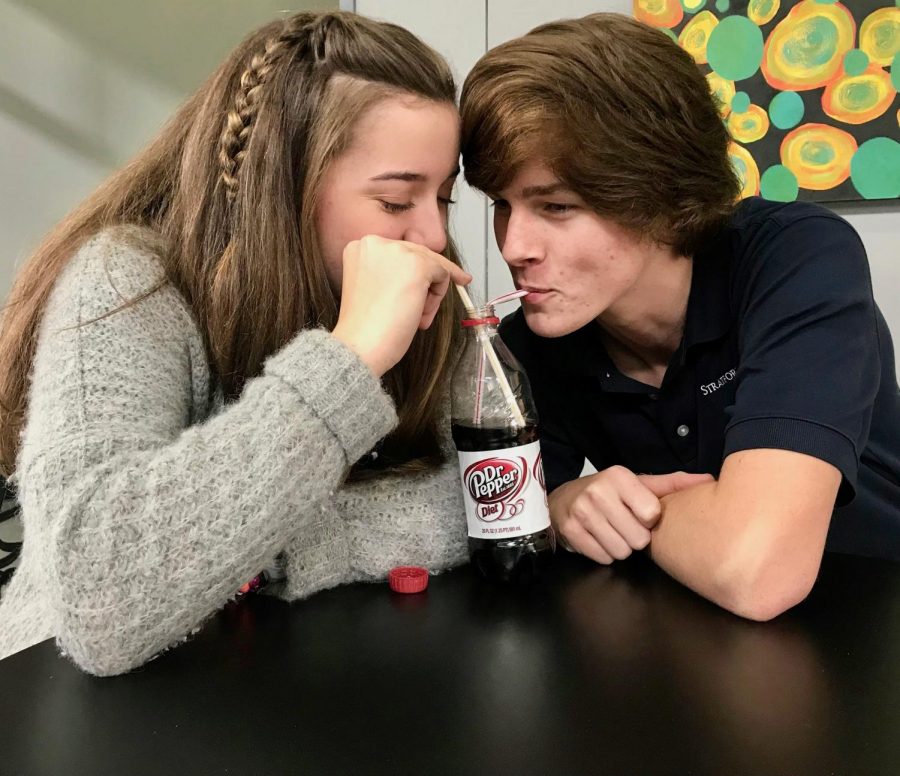 Abby Ellison and Carter Barfield share a Diet Dr. Pepper in the lobby of the science building

Valentine’s Day is right around the corner and the halls of Stratford are filled with couples.  Some have been dating for six months or longer.

True love is when you can be yourself around the other person and not have to act like another person.”

Margo Hannon and Nathan Hunt are both seniors at Stratford. They have been together for about a year. Nathan was new to Stratford last year. The couple first met at the new student orientation, where Margo was a  student ambassador.

After a year of dating, Margo thinks she has a good idea of what true love means to her.

“True love is when you can be yourself around the other person and not have to act like another person,” she said.

Another couple that has been dating for a while are juniors Devon Fitzgibbons and Jamie O’Quinn. They met at Sharptop Cove, a Young Life camp in North Georgia, their sophomore year.

At first, they did not talk that much. They really hit it off last March, when they both went to Seaside for spring break. They began dating six months ago.

Devon said true love means “someone loves you just as much on your worst days as they do on your best days. They make you feel like the luckiest girl in the world every single day and they want to share every moment in life with you.”

Sophomores Abby Ellison and Carter Barfield are among many couples at Stratford that started off as friends. They met in October through mutual friends, and they became close after spending time together and began dating. Carter transferred from FPD to Stratford this semester.

In their eyes, true love is mutual trust and respect.  For Valentine’s Day, Abby and Carter made plans to celebrate the holiday together by hanging out this weekend.